Start and Grow an Ethical Business

Featuring insights and expertise from 60+ owners of vegan-run businesses, including PR, marketing and business growth professionals. Paperback and E-Book available.

WHY THIS BOOK AND WHY NOW?

Vegan living is 'hot' right now. In just the past 12 months veganism has regularly hit the headlines – in a positive way.

With vegan food being served at the BAFTA Awards in the UK, a vegan cheese company getting a deal on the popular US TV show Shark Tank to Bill Gates investing in a company providing vegan alternatives to meat and Beyonce's plant-based food delivery service, the vegan lifestyle is starting to shed its image of bland, drab and unhealthy.

As an ethical vegan since 1996 and a longtime animal rights advocate, my mission is Vegan World Domination where animals are no longer exploited, abused, commodified or killed for human consumption. Ethical businesses play a key role in moving closer to this ideal. I want to be able to walk down high streets, go into shopping malls or the airport and for every business to be run on vegan principles – which includes treating people fairly and being as environmentally sustainable as possible.

For me, the question was: How could I, with my skills as a journalist, content creator and curator, interviewer and media coach/trainer launch my own business to help vegan business owners and entrepreneurs to start and grow their operations?

I knew there were a ton of general business books out there, many of them excellent for any small-business owner starting up. But there was nothing specifically for the owners of vegan-run businesses. While many of the challenges, advice, and strategies apply to any business, running an animal-free operation brings its own set of extra, specific challenges.

So, I wrote this book because I wanted to read it. And I figured others would find it useful too. I wanted to find out from vegan business owners and entrepreneurs themselves what their secrets of success were. How did they cope with the challenges of running an ethical business? What did they learn? How did they grow?

Thus began this book project. I conducted extensive, indepth interviews with more than 60 owners of vegan-run businesses in the US, Canada, UK, and Australia, along with vegan marketing, PR, and business growth professionals. Some are larger operations with high numbers of staff, while others are small businesses.

Among the interviewees whose insights are woven throughout the book are:

Wherever you are on your journey – perhaps you have an idea to start a business, are in the early stages of development, or are in the throes of expanding your empire – you'll be educated and inspired by this book, which is, as far as I'm aware, the first book to focus specifically on vegan-run businesses, the particular challenges they face, and how they deal with them to succeed and grow.?

“A timely addition to the reading list of every vegan entrepreneur.”

SHOULD YOU USE THE 'V' WORD IN YOUR BRANDING AND MARKETING?

OTHER WAYS TO MARKET YOUR BUSINESS

PRAISE FOR THE BOOK 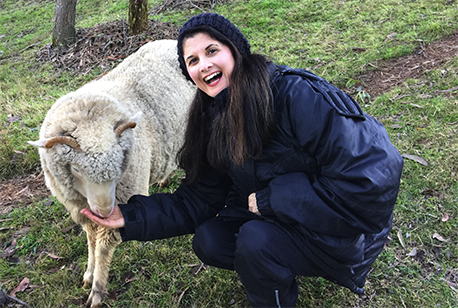 Katrina Fox is an award-winning vegan journalist and animal advocate originally from London, UK, and now residing in Sydney, Australia.

She has over 17 years’ experience writing about social justice issues, ethical business and animal advocacy for a diverse range of niche and mainstream media in the UK, US and Australia.

She writes, edits and publishes material that challenges the status quo, stimulates thinking and inspires positive change for people, animals and the planet. She also teach others – social change advocates and ethical leaders – to get free publicity through media coverage.

She is the founder and editor of VeganBusinessMedia.com, an online content hub for vegan business owners and entrepreneurs, the host of Vegan Business Talk podcast (available on iTunes, Stitcher Radio & Tunein) and a regular contributor to Forbes specializing in writing about vegan and plant-based business.

She was born in the east end of London (UK) and moved to Sydney, Australia in 2001 with her wife and two cats. She doesn't do beige and has a penchant for glitter, bling and disco.

HOW TO ORDER THE BOOK

PAPERBACK VERSION IS AVAILABLE ONLINE FROM AMAZON
&  OTHER ONLINE RETAILERS

Buy the E-BOOK version direct from Vegan Business Media
PRICE: $10 USD
DELIVERED IN PDF, .MOBI AND .EPUB FORMATS FOR EASY READING ON ALL YOUR DEVICES

E-Book is typically delivered within 24 hours of ordering