In this episode, I interview Christophe Caron, who, with his mother and father, own French vegan restaurant Delice & Sarrasin in New York. 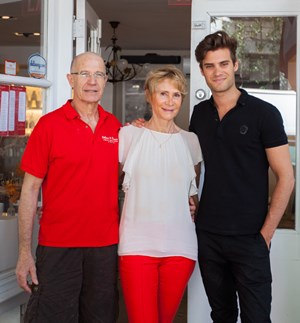 Christophe moved from France to New York 10 years ago and spent the first few years as a fashion model, represented by top agencies Wilhemina Models and Ford Models.

After becoming vegan he began craving animal-free versions of traditional French food. So he encouraged his mother Yvette – a renowned chef in France – and his father Patrick to join him in New York to open a French vegan eatery.

Since opening six years ago on Christopher Street in the heart of the West Village, the small boutique restaurant – which serves vegan versions of beef bourguignon, steak tartare and many other delicious French dishes – has become a popular destination with locals and tourists alike.

In this interview, Christophe discusses:

• The leap of faith his parents, both about to enter their 60s, took by moving to a new country and starting a venture that hadn’t been done before

• How the business attracts and retains loyal, long-term employees – and the one requirement all staff need in order to keep their jobs