In this episode I interview Simon Newstead, founder of Bite Society, a new vegan food product company in Melbourne, Australia. 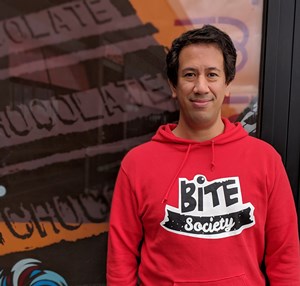 A vegan for more than 10 years, Simon’s background is in technology. He’s a co-founder of Frenzoo, a mobile games studio in Hong Kong that has been in operation since 2008.

In addition, he’s an angel investor and supporter of other companies including Ocean Hugger Foods, Shiok Meats, Kinds of Grace and Hungry Planet.

Bite Society, a zero-profit company, was started in 2018 and launched its first products, milky chocolate balls and a chocolate block earlier this year.

Simon’s goal is to lower the price of vegan goods and he hopes to inspire other founders and projects through transparency and open sharing, including the company’s financials. To this end, he’s charting the journey of Bite Society via his Vegan Startup podcast.

In this episode Simon discusses:

• The key mistake many startups make and how to avoid it