In this episode, which was recorded live in person in New York at the inaugural Plant Based World Conference and Expo, I interview Michael Schwarz, founder of Treeline Treenut Cheese in upstate New York.

Michael’s discovery of the cruelty involved in dairy production and the harm animal agriculture causes to the environment were key drivers for his decision to give up not just milk, but his entire career as an intellectual property attorney, and focus on vegan cheese making. 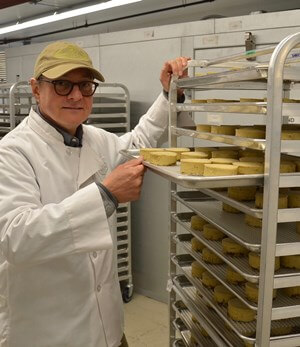 Raised in South Africa, Michael inherited his activism from his parents. His father, Harry Schwarz, was a key figure in the fight to end apartheid and a long-time friend and colleague of Nelson Mandela.

Michael moved to the US in the 1980s at the height of apartheid’s power, went to law school and for over 25 years, practiced IP law in Dallas, London, New York and Washington.

In 2012, he began to experiment with fermenting cashew nuts, culminating in the launch of Treeline, which is now a national brand, available in grocery and specialty stores across the US, including Whole Foods, Kroger, and many independent health food stores and small chains.

In this interview Michael talks about: