In this episode I interview Preston M. Smith, a vegan artist from Los Angeles.

Known by the provocative moniker ‘PMS’, in 2009 Preston was commissioned to paint 12 portraits of President Barack Obama, for the Inaugural Purple Ball in Washington DC, where his paintings were distributed to celebrities and collectors including Ed Harris, Ashley Judd, Amy Madigan, Josh Lucas, Patricia Arquette, Il Divo, and more. 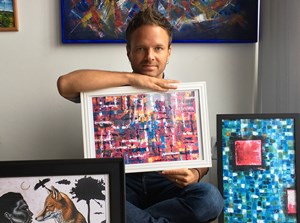 Having been through art school and working part-time in restaurants and other jobs while building his body of artwork on the side, Preston eventually came to a point where he was able to work full time as an artist, showing his work in galleries as well as selling it online to the general public and collectors across the globe.

Part of this transition involved in a shift in mindset from the ‘tortured starving artist’ to an entrepreneur running a creative, art-based business. This change is captured in a short documentary about Preston, called ‘Negativity to Creativity’, directed by Antonio Lugo-Ponce. The film highlights the artist’s process as well as a new painting that he is working on as part of his ‘Garbage Collection’, a series dealing with reducing our carbon footprint and becoming more eco-friendly in art.

As well as including his own recycled material in his artwork, Preston ensures he only uses vegan-friendly brushes and paints.

In this interview Preston talks about:

• The one action you need to take to stand a chance of becoming a successful, fulltime artist

• Whether art school is still necessary to be successful

• Whether art shows are still relevant

• Why the ‘tortured, starving artist’ trophe is so dangerous and how ditching it was key to his success

Visit the PMS Artwork website
Watch the 3-minute documentary Negativity to Creativity below: