In this episode I interview Ed Lower and Malindi Lovegrove from The Chocolate Yogi in Sydney, Australia.

Ed, who’s from the UK, worked as a bookkeeper for many years in the media, entertainment and technology industries, while nurturing his creative side with a side hustle as a voice-over artist for TV adverts, cartoons and online media. 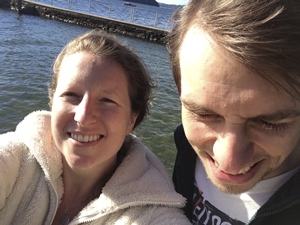 Malindi, who’s Australian, has worked as a Community Development Worker in South Africa, the UK and in Tanzania, where she lived and taught about sexual health and HIV prevention in a rural village for six months.  She’s also taught yoga and meditation all over the world.

After returning to Australia in 2013, the husband and wife team started their business because they both had dairy allergies and couldn’t find creamy vegan chocolate that they liked.

They began experimenting in their home kitchen and started to get involved with Sydney Vegan Club, educating themselves about how animal agriculture impacts people, the planet and animals.

Already vegetarian, they quickly made the transition to ethical veganism and began gently introducing the philosophy into The Chocolate Yogi’s branding and packaging.

In this interview Ed and Malindi talk about:

•    How they got their products into more than 100 stores, without a distributor