In this episode I interview Doron Petersan, founder of Sticky Fingers bakery and café, and the newly launched Fare Well diner in Washington DC.

Doron started Sticky Fingers in 1999 in her home kitchen before moving to a small basement storefront where she teamed up with Kirsten Rosenberg to create a vegan baking empire that included a chain of stores in South Korea. 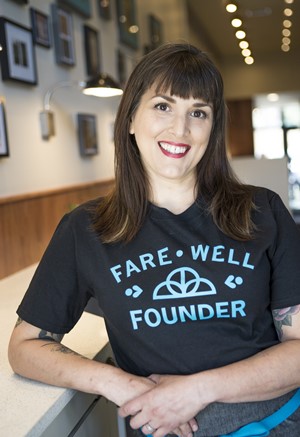 After Kirsten moved on to pursue her other passion of music, Doron went on to win the Food Network’s Cupcake Wars twice and expanded Sticky Fingers into a café popular with both vegans and health-conscious consumers.

With a degree in nutrition and food science, Doron is passionate about introducing people to creative and delicious animal-free foods.

To that end, she opened Fare Well, a diner, bakery and bar serving an array of tasty savoury comfort dishes and sweet treats in the Atlas District in 2016.

Being in the heart of DC, Doron has been providing catering services to several senators. Vegan senator Cory Booker has been a customer of Sticky Fingers for years and also recently visited Fare Well.

In this interview Doron talks about:

•    Why just because you’re making a lot of money, especially at the start of your business when you’re new and hot, doesn’t mean you’re profitable