Dan founded the company in 2005, pioneering flavored, wheat-based seitan. Nicole, his life partner, who also owns two yoga studios, came on board in 2010 and now serves as vice-president. 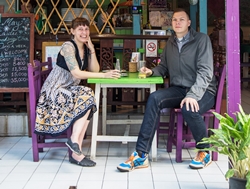 The business started off small, operating out of a shared kitchen, and has grown to the point where its products are sold in around 2,000 outlets across the US.

Three years ago it moved into a new building and opened Upton’s Breakroom, a café for staff and the public.

In 2015, Upton’s launched the first-to-market, seasoned and ready-to-eat jackfruit in the US.

Five years ago the company took off the word ‘vegetarian’ from its packaging, leaving ‘vegan’ to do the job of explaining the products’ animal-free status.

As well as helping to run Upton’s, along with her yoga studios, Nicole is a founding board member of the Plant Based Foods Association, a newly established trade body representing plant-based alternatives in the marketplace, government, and media.

In this interview Nicole and Dan talk about:

•    The challenges of starting a company with a business partner

•    The benefits of implementing a slow growth plan for your business