In this episode I interview Nil Zacharias, co-founder and editor-in-chief of independent publishing platform One Green Planet in New York.

After more than a decade working in the digital media space, at companies including Yahoo!, DoubleClick (which was acquired by Google), PricewaterhouseCoopers Advisory, and as an attorney specializing in privacy and intellectual property law, Nil decided to take his passion for the environment into building a purpose-driven media company. 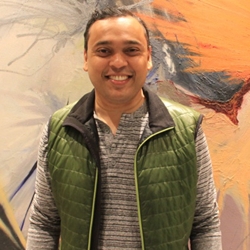 Since its inception in 2013, One Green Planet has become one of the fastest growing media outlets in the food sustainability space.

With a team of just two people at the beginning, within a year of its launch, its audience of largely millenials had grown from 300,000 to 3 million. It currently stands at more than 6 million and the company now employs a team of staff in a dedicated office.

Interestingly, despite the liberal use of the term ‘vegan’ in its content, the majority of One Green Planet’s audience are not vegan.

In April 2016 One Green Planet launched Food Monster, the biggest vegan recipe app, containing more than 5000 recipes with new ones added each day.

In this interview he discusses:

•    Why it’s wise not to talk too much publicly about your idea before you’ve built something, especially if you don’t yet know what your product or story is