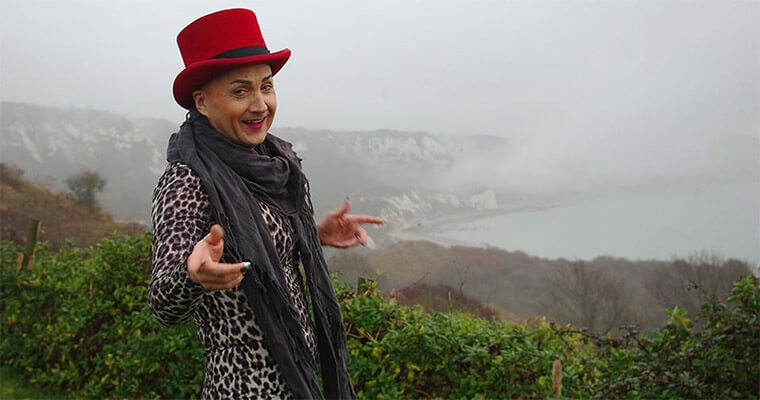 Yet while his colorful and flamboyant style may raise eyebrows in some circles, it’s this willingness to take an innovative and unconventional approach to life that has driven his company – the first in Europe to commercially market soya milk and dairy-free chocolate – to become a multi-million-pound operation.

It’s fair to say that unconventionality runs in the family. His late father Arthur Ling went vegan back in 1926 at the age of seven, nearly 20 years before the term was officially coined by the UK Vegan Society (of which Arthur became an active member) in 1944. He also created a company that used sunflowers to create biodiesel after the Second World War, a project that was too ahead of its time to achieve commercial success.

“My father was a visionary individual of his time. He was amiable, driven, single-minded but stubborn. These qualities can be double-edged as without these I’m sure Plamil wouldn’t have started the vegan food market in Europe,” says Ling who has embraced his father’s determination to be unique and do things differently. “I honestly don’t think I consider what to wear any different to most. I get up in the mornings and decide the same as most people do, the difference being that I end up with a different result. I think this thought pattern goes back to the heart of everything. To end up with a different result in life and business perhaps requires just different perception. Maybe in the past there’s been a few occasions over a decade ago in which I sensed some untenable reaction to me, but I can’t say that’s a barrier now. On the other end of the scale I’ve been asked to sign autographs at airports, with some people convinced I’m a pop star, even when I’ve told them I’m not! In the end I like to think that how I look is only a small factor and that most people see my enthusiasm and – I hope – my professional approach to business.”

The seeds of Plamil (short for ‘plant milk’) were sewn during the 1940s, continued throughout the 1950s with the formation of the Plant Milk Society, which researched leaf proteins, before eventually growing to fruition in 1964 when the organization, by then called Plant Milk Limited, produced the UK’s first soya milk. The company changed its name to Plamil Foods in 1972 after the directors realized they wanted to produce more than just dairy-free milk. 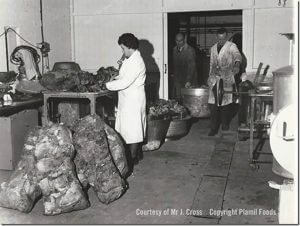 Ling recalls his first summer job at the company’s factory, a former dairy, in Folkestone, Kent, on England’s south-east coast, at the age of 10. “I had a job sealing tin cans on the production line. I had a special step so I could reach the buttons and so I didn’t get splashed in the face with soya milk if anything went wrong with the sealing. This process was at chest height for an adult. I shudder to think of health and safety issues!” he laughs.

Plamil was and still is always more than a company created solely to make profits. Its mission is to spread the philosophy of veganism and encourage vegan living. For several decades the private limited company made no profit but was kept afloat by a few individuals who self-funded it via the Plant Milk Trust set up by Arthur Ling.

“When the company started, customers interested in vegan products were literally in the tens, maybe not more than 100 people,” says Ling. “We created the vegan food market from nothing. There’s always a price to be paid for being the first to market, such as high production costs for a relatively small volume. Many companies nowadays may claim extremely high growth in sales, but Plamil’s long, steady sales growth over decades puts our overall volumes at a higher point to start with. Our sales have grown at a rate of some 10% a year in the past few decades, then 40-50% in some sectors in more recent years. For the past decade we started to make a profit as sales volumes increased and this in term enabled investment annually to some £250,000 in larger and more efficient production. This year we’re planning to add additional capacity which will enable us to supply every person in the country with a chocolate bar.”

When Ling, who joined the company 30 years ago after abandoning a career as a chemical engineer, took over as managing director 14 years ago, he recognized the need to branch out into different markets, including the free-from, allergen, fair trade, organic and no-added-sugar categories to increase Plamil’s sales of chocolate, chocolate spreads, egg-free mayonnaise and organic soya milk. Its bestselling product is the dairy-free, organic, fair trade milky chocolate bar and its biggest market is currently Europe. Its new So Free range of chocolates caters for 13 different languages, which will expand to 18 this year, a move that Ling predicts will increase sales by another 25%. Currently retail makes up 80% of the company’s sales, with 5% direct to consumer and the remaining 15% across food service, catering and wholesale combined. 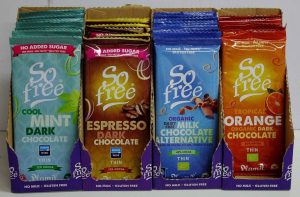 A commitment to the wellbeing of people, animals and planet

What sets Plamil apart from many other companies, especially those producing chocolate, is its extraordinarily high ethical and environmental standards.

It manufactures its products in a dedicated vegan factory that’s free from nuts, gluten, dairy, egg, fish and other allergens. “Chocolate is hard to produce as a dairy-free product because the chocolate has been made on machinery that’s difficult to clean down, which is why most chocolate brands put a ‘may contain milk’ statement on the label of any dairy-free chocolate they make,” says Ling. “Plamil decided to invest in producing a product that’s completely dairy free and that’s why we got into manufacturing.” So dedicated is the company to spreading the vegan message that it also manufactures chocolate for other brands that compete with it for shelf space. “The advantages are you can literally fill your production lines up and everyone benefits from scale of production,” Ling explains. “And it keeps everyone on their toes if you have a competitor. It’s good for the marketplace.”

On the environmental front, the factory, which currently employs 50 staff and operates 24/7, is powered by 100% renewable electricity and the firm’s packaging uses only recycled or recyclable materials.

From a health perspective, the company is committed to producing “wholesome” products and therefore rejects GMO and nanotechnology. It was the first chocolate manufacturer in the UK to be registered by organic certifying body the Soil Association and the first to be certified for its no-added-sugar products by Sugarwise, an international certification body for sugar claims.

Human rights issues are as important to Plamil as concerns for animals and the environment. As such, the company has a commitment to never knowingly source or use ingredients or products that involve child or exploitative adult labor. This has been found to be particularly prevalent in Western African countries, which produce 70% of the world’s cocoa. Plamil uses cocoa certified by UTZ, a program promoting sustainable farming and better opportunities for farmers and their families, and is one of the chocolate providers recommended by the Food Empowerment Project, which compiles lists of companies that do and don’t source their cocoa from countries where slavery and exploitation is known to be rife.

The company also looks after staff on the home front, many of whom have worked for the firm for years. As well as providing continual education and development, it adheres to the Ethical Trading Initiative’s Base Code, an internationally recognized code of labor practice that includes the right to freedom of association and collective bargaining, to be paid a living wage, along with no forced labor, excessive working hours, inhumane treatment or discrimination. 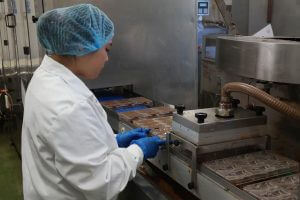 Finally, Plamil uses only banking services that are committed to working as closely as possible to the company’s ethos.

These commitments have resulted in the company being ranked highest in all the chocolate ratings by Ethical Consumer magazine since 2006. “Ethical is the choice between right and wrong,” says Ling. “I couldn’t sleep at night if I knew any profit was due to forced child labor or at the untold expense of the environment.”

While these high ethical standards are an intrinsic part of the company’s philosophy, Ling admits there are expenses involved, which result in it being more difficult for brands like Plamil to compete for shelf space with large conglomerates. “The more ethical a business is, the more expensive the end product,” he says. “It’s a balance we strike at Plamil by analyzing and looking at different ingredients and how they’re grown and come together and then making decisions about our supply chain. We look at the environment, the whole ecology and human expense, especially in chocolate. We take a holistic approach to creating ethical products.”

Throughout its 54-year history, Plamil has weathered many storms, including the Global Financial Crisis in 2008 and is now facing the ramifications of Brexit. “The current issue is that the terms of Brexit are unknown and the complexities of the issues are completely underestimated,” says Ling. “Like other companies we’ve taken measures to protect ourselves as far as possible from negative impacts, including selling to customers in euros, buying raw materials in euros and having a dedicated European sales manager based in Holland.” 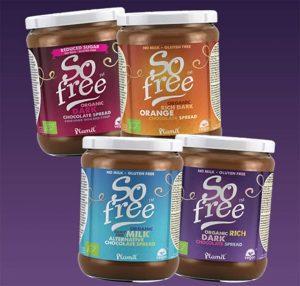 All Plamil’s products, including the new So Free range of chocolate spreads, are made in a dedicated vegan facility that is free from gluten and other allergens. (Credit: Plamil Foods)

As for the next half century, although Plamil products are sold in most countries, Ling wants to scale up sales and distribution in the US this year, particularly for its new So Free brand of chocolate and chocolate spreads. The recently launched range, which includes formula updates and brightly colored packaging, represents fun and enjoyment – an extension of Ling’s own personality which has earned him the nickname the ‘vegan Willy Wonka’. “Having a chocolate factory is fun and there’s not many jobs where you come home and your wife says she can smell chocolate on you!” he chuckles. “All too often vegan or free-from chocolate is as boring as the wrapping, or at best tastes of cardboard. The So Free rebrand of our Plamil chocolate range is a major shift for us, but innovation is what we’re known for. It’s important for a business to never get stuck in the mud. Always look two, three, 10 years ahead as you don’t want to get left behind.”