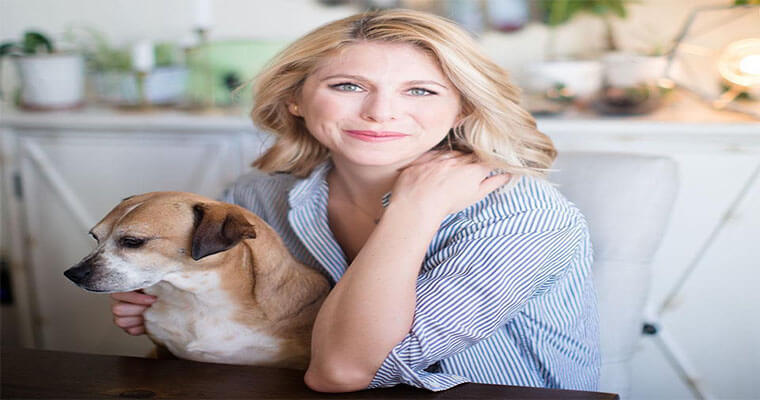 Two years ago, in between her work as then executive vice-president of her family’s candy business Smarties, Liz Dee had an idea: To connect and empower vegan women to get ahead in their careers and businesses while advancing the cause of animal advocacy. She got together in her NYC apartment with six friends and Vegan Ladyboss (VLB) was born.

Over the next 12 months the initiative grew via word of mouth, as vegan women invited their friends to the NYC networking events and posted about them on social media. Enquiries from outside New York and even other countries began to pour in and Dee (now co-president of Smarties) hired a community director and put together an advisory council. “By that time, we had waiting lists of interested parties from all over the world ready to get started,” says Dee. “We finalized a meeting structure, launched VeganLadyboss.com and created an Organizer Starter Kit. By March, 2018, the infrastructure was finally in place for sustainable global expansion.”

VLB currently boasts 11 chapters, including Colorado Springs, San Francisco, Los Angeles, Philadelphia, and Halifax in Canada. The network is trans-inclusive and meetings are open to all vegans who identify as women. The number of members in each location varies, with the NYC meetings attracting 60-80 women aged between 21 and 70, who are a mix of students, grad students, full- and part-time employed people, and entrepreneurs. This includes high-profile vegan influencers such as bestselling author Victoria Moran of lifestyle coaching business Mainstreet Vegan Academy whose books have been endorsed by the likes of Oprah, Ellen DeGeneres and Bill Clinton; and renowned business journalist and TV commentator Suzy Welch.

Anyone can apply to start their own VLB chapter in their area and there’s no limit to the number of VLB meetings that can be held in any one location. To make meetings as accessible as possible, they must be free to attend.

At the end of each meeting, attendees are invited to submit an ‘ask’ – a request for something from the group. Those who can provide help raise their hands so the women can connect after the meeting to make it happen.

The past couple of years have seen a number of successful professional collaborations between women as a direct result of being part of VLB.

Frances Gonzales used the meetings in NYC to improve her public speaking skills. She also secured a business partner for her Vegan Wines subscription club and organized a vegfest in Puerto Rico. “I’ve been able to come out of my shell because of these monthly meetings,” she says. “It helped me be fierce in getting the VegFest Puerto Rico event going. There were many obstacles because I’m vegan and a woman. Yet, the more the mayor’s office told me ‘no’, the more I knew I had to push and speak up. I also met sommelier Sunny Gandara at a Vegan Ladyboss meeting who’s now my business partner in Vegan Wines. I honestly can say that meeting Sunny and having her be part of Vegan Wines is the best thing that could have happened for the company.” 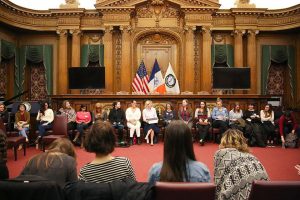 While many of the women who attend VLB meetings live in the local area, some value the networking opportunities so much that they make the effort to travel from out of town. Melissa Trusty, a raw vegan and whole foods plant-based chef, makes a 10-hour round trip from Washington, DC, every month to spend two hours at the VLB meeting in NYC. “I leave the meetings every time on cloud nine, returning home in the very wee hours of the next morning, pumped up and ready to action the tidbits I learned to help move my career in the right direction,” she says. “Some people don’t understand why on earth I do this, but sometimes it takes going the extra mile and doing out-of-the box things to move your career in the upwards direction.” Trusty’s long trips have proved worthwhile. As well as receiving valuable advice on how to start her company, she also landed a modeling gig for digital vegan fashion and beauty magazine La Fashionista Compassionista (LAFC).

Meanwhile LAFC’s founder and editor-in-chief Adrienne Borgersen has also reaped benefits from being part of the VLB community. She’s secured Welch for the cover of the Spring/Summer 2018 issue, hired marketing expert Sharon Nazarian of Big City Vegan to help her with the magazine’s social media strategy, and signed up a slew of new subscribers. “I’m so grateful to the VLB members who’ve subscribed, shared and contributed to the magazine, which is run on a bootstrapped, shoestring budget,” says Borgersen. “As a self-proclaimed introvert who really hates networking, it’s miraculous that I’m completely comfortable among these strong, passionate, supportive and hard-working women.” [article continues]Welch – a CNBC journalist, speaker and author – is such a supporter of VLB that she hosts some of the NYC events at her home in Manhattan. She also uses her high profile and skills to help other vegan women progress in their careers, including yoga teacher Lisa Rachel Snyder, who’s started a business based around how she healed a lifelong eating disorder with a plant-based diet. “When Liz launched VLB, I don’t think any of us guessed how quickly it would grow, and how powerful it would become as a tool for women to help each other professionally and personally,” says Welch. “I’ve never seen a network with so much camaraderie and positive energy.”

VLB has also provided opportunities for freelancers to pursue side hustles and passion projects, as well as business collaborations. Copywriter and events producer Nell Alk has used the network to get help from other women to share information about, sponsor or attend events she’s produced such as the NYC premiere of Kangaroo and a nationwide theater screening of Eating You Alive, which played nearly 600 cinemas in cities throughout all 50 US states in April. And Giuliana Hazelwood, social media strategist at frozen meal subscription service Daily Harvest, gained the confidence to start her t-shirt subscription service Do Better Box in her spare time. 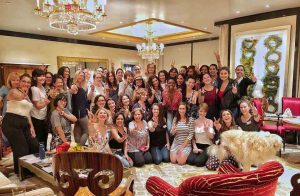 Even VLB’s community director Adriana Suarez has seen unexpected outcomes as a result of being part of the network. Suarez works full-time as the marketing director for Champs Empire, a Brooklyn-based all-vegan restaurant group which includes Champs Diner and Screamer’s Pizzeria. Through VLB she’s been able to foster strong relationships with other local vegan companies, resulting in several collaborations with Champs Empire, as well as starting her own business. “VLB has provided such an invaluable platform of freelancing opportunities for me that my once side gigs of creative services and digital media management have rapidly developed into a company, Blood Orange Agency,” says Suarez. “I’m continuously in awe of the opportunities that present themselves within this collective.”

Paying it forward is a mantra of the VLB network, so when fashion designer Lois Eastlund needed a space to hold a pop-up sale of her eponymous clothing line for one day during NY Fashion Week, Suarez stepped in and offered her the back room of a vegan convenience store at no charge. “Adriana also created a social media flyer and campaign for me,” says Eastlund. “I had a great day selling and she couldn’t have been more helpful. I hope to pay it forward to another VLB who needs something that I can offer.”

While the NYC meetings are more established, even those VLB members who’ve recently started their own chapters in other states are already reaping the rewards. “As a self-employed ‘vegepreneur’ I often feel isolated,” says vegan culinary coach JL Fields. “I run a vegan business in a small city and my scope is narrow. Once I launched a local chapter of Vegan Ladyboss I found myself surrounded by other vegan women leaders and immediately felt connected to a community I didn’t even know existed. Whenever I have a business need, I turn to my local chapter members and get answers and support immediately. In a world of competition, there’s something special about a cohort of women who all have a shared mission – change the world for animals, the planet and people through compassion – and are determined to support one another’s individual success.” 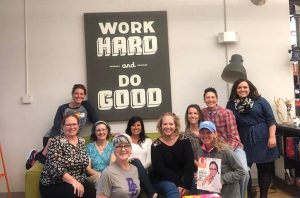 Moran, who has also hosted a meeting in Harlem, NYC, agrees. “Vegan Ladyboss raises the bar on what a focused, committed, vegan woman ought to expect from herself,” she says. “There was a time when the expectation was that you’d cut out animal foods and cruelty-based clothing and toiletries, donate to vegan charities, and show up for some protests. In the Ladyboss community, that’s Vegan 101. We’re looking at results-based ways to move the world forward to veganism via our own gifts and talents. Almost no one shows up at these meetings, regardless of age, who hasn’t already embarked on a reasonably remarkable business or creative project.”

As for why the network has grown so quickly and resonated with so many women, Dee – who also runs venture capital firm Baleine & Bjorn Capital which has invested in businesses that have several vegan ladybosses at the helm including fashion brand Vaute’s Leanne Mai-ly Hilgart and plant-based meal planning company Lighter’s Micah Risk and Alexis Fox – believes it’s because it’s an idea whose time has come. “I created it because I wanted it in my life,” she says. “And it turned out I wasn’t the only one seeking this kind of community.”